7 Day Serve Obsession Challenge
Give me $1 and I will give you 7 days of the BEST serve training you have ever experienced :)
It's Only $1! Transform your serve in 2020

Transform your serve in 2020!!!
Your Mission: You will have 48 hours to each training day to complete your 7 Day Challenge

ONE TIME OFFER: This is the ULTIMATE is Serve Power Training! There are 17 power leaks someone can make on the serve that robs them of power. Inside this training I reveal what the leaks are and how to easily turn your "power leaks" into "power sources". By the end you will have The UNBREAKABLE Kinetic Chain that produces EASY power. Hit the ball harder with less effort...Sign me up!!! The course is only available right here and normally retails for $97 but you can pick it up for just $47 when you check the box to add to your order :) 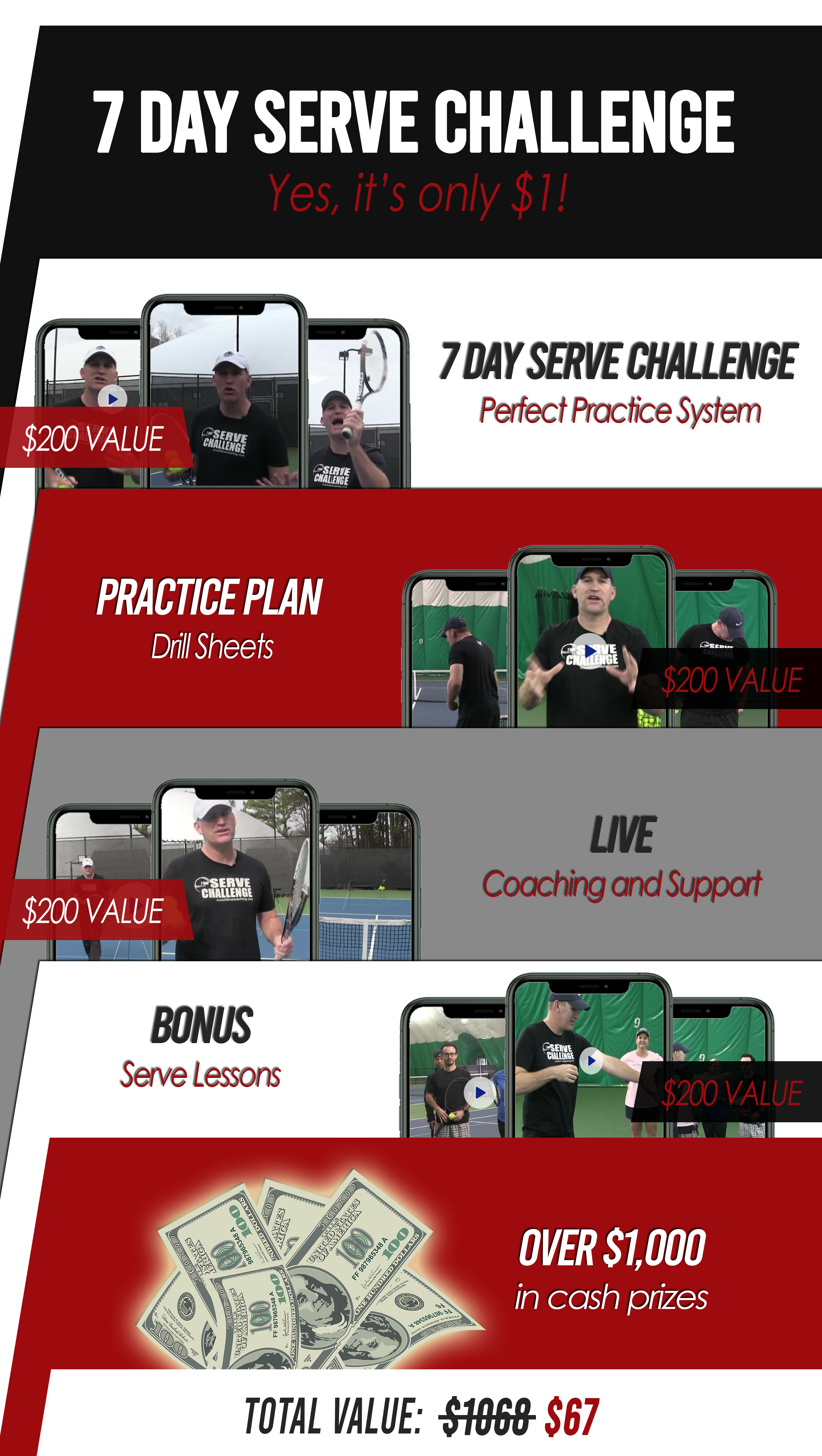 I am more convinced then ever! The way you practice will have a major impact on how you play. Over the past year I have dived deep with students all across the world.

Over and over again I see people practicing in a way that just reinforces their bad habits. Year after year you are going out with your trusty basket of balls to practice your serve and digging yourself deeper and deeper in a whole!!!
Practice does not make perfect, if you keep practicing the wrong way you are building your own tennis grave!

I know from personal experience one of the most frustrating and embarrassing things a tennis player can go through is to lose control of your toss!

What the heck!!!! You control every move, and it is just a basic under hand toss!!!
This should be SO easy.....but we all know it is not.
The toss is the one part of my serve game that makes me nervous.
Why ?
Because a bad toss ruins everything!
Over the years I have developed a 10 minute routine that will make your toss so simple to hit!
Plus, I am going to give you mental and physical ques you can use in a match to get rid of your serve toss yips for good!

DAY 3: Eliminating Your #1 Serve Leak with 3 No Fail Exercises>>>

Every Serve Specialty Camp I run people are pumped up for me to show them how to "Serve the Curve" or hit the "Sick Kick".

Unfortunately, there is one major roadblock. Usually, 7 out of the 8 students are not ready to really dive deep on these two deadly serves weapons because they have a MAJOR serve leak that must be fixed first.
Later this week I want to teach you how to hit a nasty slice serve and kick serve.
But I can't do that with you unless we eliminate your #1 serve leak first.
Trust me unless you are a 4.5 plus player I can almost guarantee you have the #1 Serve Leak that keeps you from developing the serve of your dreams.
So this week I am here to make your serve dreams come true.
Sign up Now for the 7 Day Serve Challenge and trade in your hack attack serve for a REAL serve you can be proud of!

Once we fix your #1 Serve Leak you will finally be able to pronate like the pros.

Here is a Big Secret you may or may not know.
The pros don't pronate the same exact way on every serve.
It all depends on how hard they want to hit the ball, how much spin, and what type of spin they want to place on the ball.
It might sound complicated or intimidating but it is not trust me.
And it is essential we go over this
Sign up Now for the 7 Day Serve Challenge so you to prepare for Power Serving Day!

How awesome would it be to hit a serve over 100 mph!

Now of course I can't guarantee all you will be able to do this after our training session together but some of you will for sure!
And all of you will have SO many power moves to work on!
This is going to be so exciting.
I actually think teaching people how to hit harder serves is SUPER EASY.
That is NO joke I have seen it happen right in front of my eyes countless times!!!
And it is an adrenaline rush for both coach and student.
If you want to know what it feels like to Finally have a BIG Boy or Girl serve you can't miss this training session.

I believe a killer slice serve is the "Biggest Serve Weapon" you can Easily develop.
It does not matter your age, height, or skill level you can own this serve and it completely changes you as a player!
The slice serve can completely dominate a match in doubles.
It creates tons of FREE points because your opponents will keep pulling the ball wide.
And gives your partner TONS of easy put away volleys.
I have NEW never seen before progressions that will have you slicing the serve right after your first practice!!!!

By far the most confusing and requested serve in tennis.

At every camp I run there are a handful of people asking me, "When can you show me the kick serve? I really want to get it."
I had one gentleman in Texas named Steve hound me the entire weekend.
He had an excellent serve actually, it was by far the best at the camp.
Steve had the heater and learned to Serve the Curve the year before at my Newcombe Ranch Consistency Camp.
The only thing missing to make his serve the complete package was the Sick Kick.
His first couple of attempts were really bad.
No bite and No Kick.
Like most students, his Kick Serve was actually more of a weak slice.
Then I took him through this one progression I am going to share with you and just like Magic the Sick Kick appeared!
The next think to appear was a BIG smile on his face.
He finally could feel the elusive kick and knew exactly what he needed to work on to complete his serve arsenal!
Click to Sign Up

After watching your 7 Day Serve Obsession Challenge print out your daily drill sheet and bring it to the practice court.
Your drill book includes:
1. The Money Challenge of the day so you know The "Secret" to winning FREE Money!
The Money Challenges are easy to do regardless of age or skill level!
2. Warm Up Exercises so you can practice your serve safely!
3. Drill Progressions follow the step by step progressions complete with images so you practice the right way and stop wasting valuable practice time!
4. Quick Tips and Key words that provide you with friendly reminders that are essential for developing a proper serve technique.
5. Score Cards so you can track you progress you can enter your serve score for each day of the 7 Day Serve Obsession Challenge!
This will be your trusty guide you can use to make sure you are always on the right track! 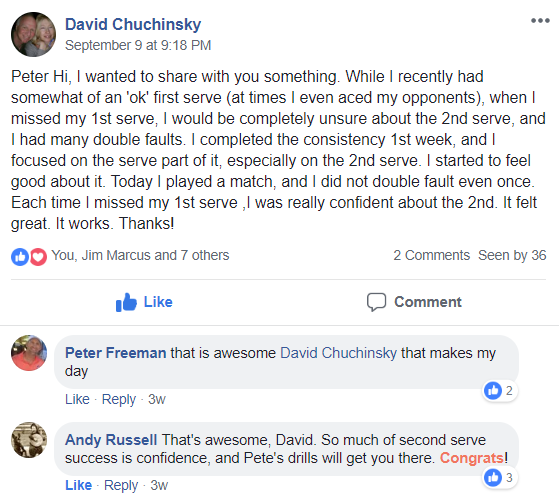 I will be there with you each day every step of the way!!!
You will see on each training day a circle picture of me.
This is really cool and I don't know of anyone else doing something like this.
When you click on my image you can communicate with me in 3 different ways.
1. You can leave me a written message that I will respond to.
2. An Audio message where you can freely express yourself in more detail.
3. A video message where you can talk to me and even show me what challenges you are facing.
This will make the program more interactive and more valuable then any serve program you have experienced!